The first relative noted in the family bible is Red John Langan described as a cheiftan.

On the Ancestry web site, a John Langan who was born in 1775 is found.

A Cheiftan in Ireland was the leader of a Clan, a group who shared a common surname. The Great Rebellion in 1798 in Ireland, the ferocious and bloody prequel to the Act of Union between Great Britain and Ireland in 1800, created what is now known as the United Kingdom of Great Britain and Northern Ireland. Red John would have been about 25 years old around the rebellion.

The note in the Bible says Red was a leader in Connaught and Leicester. The Connaught was a Province in Ireland comprised of five counties, Mayo, Sligo,Galway,and Roscommon. The Leincester is,perhaps,Leinster, another Province with twelve counties including Carlow, Dublin, Kildare, Kilkenny ,Laois, Longford, Louth, Meath, Offaly,Westmeath, Wexford and Wicklow.

County Mayo has the largest number of families with the surname Langan. John died in Sligo which is adjacent to Mayo in 1837.

Michael Langan was born in 1816 in Ireland, the son of Cheiftan “Red” John Langan. The Langan county of origin is likely County Mayo where 77 Langan families were recorded. A Michael Lingin is recorded on the manifest of the Yorkshire traveling from Liverpool to New York City in 1851. The bible tells us that he traveled to Syracuse, New York and went to work for John Murphy. John Murphy had two daughters, Mary, who married James Otis and Bridget, who married Michael Langan. Bridget was born in Ireland in 1831. There was a Bridget Murphy on every boat crossing the Atlantic and it is difficult to know which Bridget is our Bridget.

Bridget and Michael made the journey to the central Illinois and settled on farmland in Eagle township in LaSalle Illinois. Their oldest children, Ellen in 1856 and Patrick Henry in 1860 were born in Eagle township. The evidence is in P.H. Langan’s obituary.

A few years later, around 1862, Bridget and Michael settled in Dwight/ Nevada/Blackstone, Illinois where they bought a farm. They had four children in addition to Ellen and Patrick. John born in 1862, Michael, 1865 and James in 1867. A baby named Joseph died in infancy.

James Langan,perhaps a relative, was a farmer working in Sunberry township next to Blackstone in Nevada, Township. He was born in County Mayo in 1828.

William Martin’s father was an Anglican minister in England.  William  Martin,Jr  came to America.  On the boat he met Mary Barry, one of four sisters traveling to America from Leicester, Ireland, County Roscommon. 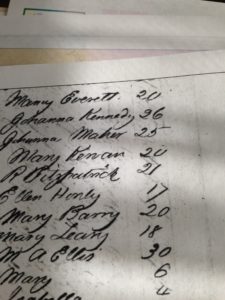 They married in New York and came to Illinois.  This information is recorded in the family bible.They settled near Ottawa, Illinois.

The Illinois Michigan Canal opened in 1848 in LaSalle, Illinois.

The next milestone is a son, John, is born in Illinois in 1854.  HOWEVER, a son James was born in 1856  and a son George in 1860 in Davis, Caldwell County, Missouri.The 1860 census provides those facts. Davis was in the northwest corner of the state of Missouri and was aptly described as the wild west. Both John and James die in Missouri as described in the bible.  A daughter Sara is born in 1861 in Missouri and in 1866, Maria is born in Illinois. In Maria’s obituary she says she was born in Deer Township in South Ottawa, Illinois and moved to her father’s farm in Highland Township, Grundy County, Illinois in 1867.

In the 1870 census, Mary and William are in Highland with their  eleven year old son, George.  On the day of the census Sara,9yo and Maria, 3yo,are at the Telly family”at school”

In the 1880 census, Mary is widowed as is daughter Sara Ryan who has a one year old daughter, Catherine.  Sara later marries Robert Doran and Catherine becomes Sister Mary Alphas Ryan.

Note:In December, 2016, the author, Maria’s granddaughter, submitted a DNA sample to Ancestry.com.  The report stated that her ancestry was <1% English.  This raises questions about William Martin.  He was described in the family bible as English and the son of an Anglican minister.  In the 1860 census he lists his birthplace as England.  He still could have been of Irish ancestry himself.  The Anglican church was the second largest church in Ireland.  The alternative is that he wasn’t Maria’s father!  Mary Barry is buried in Dwight and her tombstone says she was the wife of William Martin , but he isn’t buried there.  He died 20 years before Mary.